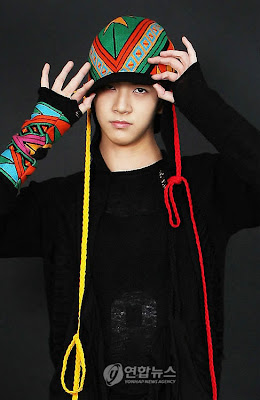 Yes, you read the title right and no, we are not making this up! Sorry Blackjacks and Clouds!

I would have thought that the brother would be protective over his sister, regardless of who’s older but apparently, MBLAQ’s Thunder wants his sister Dara to date his producer Rain!

During a Newsen interview with MBLAQ, Thunder was asked, “What did your sister, Sandara Park, say about MBLAQ’s performance?” To this question, he answered, “She complimented me saying that we’re getting better each performance.”

Thunder also expressed his thankfulness towards his sister by stating, “My sister keeps texting me, asking where I am. She also monitors my performances a lot.”

Continuing on with Thunder’s individual interview, he was asked, “Is there a person you would like to introduce your sister to?” However, even before the reporter finished asking the question, MBLAQ members started to ramble off about who they thought was ‘right’.

In response to the reporter’s question, Thunder answered, “G.O.” At first, he replied with this response because he thought G.O’s humor would be perfect for Dara. However, he quickly changed his mind and replied, “Come to think of it, Rain hyung would be better. As much as Rain is a top celebrity, I think he and Dara will match.”