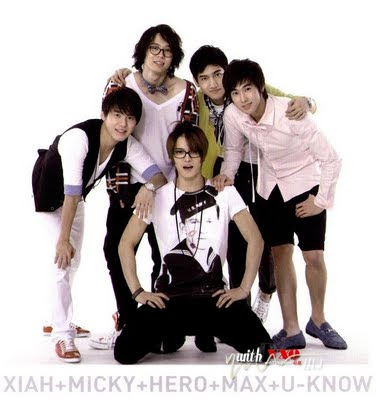 Although TVXQ have put a stop to all their activities within the country (T/N: Korea), but TVXQ's popularity is still blazing. On 2nd October, as part of TVXQ's official schedule, they performed passionately in Shanghai for their Shanghai, China, concert. It coincided with China's national holidays and the Mid-Autumn Festival, but they still managed to bring all 40,000 Chinese fans in the stadium, into a frenzy.

Also, the duet single that was released in Japan during the end of September, by TVXQ members Jaejoong and Yoochun, as well as the celebratory DVD for TVXQ's Tokyo Dome performances, achieved first place on the Oricon charts on the very first day they were released, and these two works were also certified "Gold" by the RIAJ in October (surpassing 100,000 in sales).

When the Oricon Editor-in-chief was receiving an interview from "Star the Secret" and TVXQ was mentioned, he didn't hold back from heaping praises, and said, "They are number one on the Oricon charts for non-Japanese artists and other Asian artists, and this is something that has not been seen in the past 20 years, this is a first. Foreign artists who have sold more than 100,000 copies, after Led Zepplin and The Beatles, TVXQ are the first. (T/N: He's talking about the video ranking - Tokyo Dome DVD got #1) Amongst all the Korean artists, TVXQ have achieved the most success in Japan."