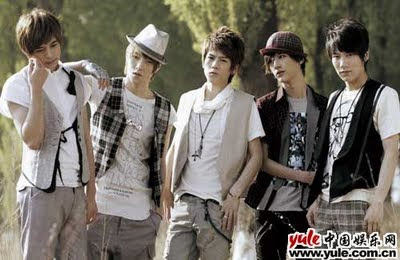 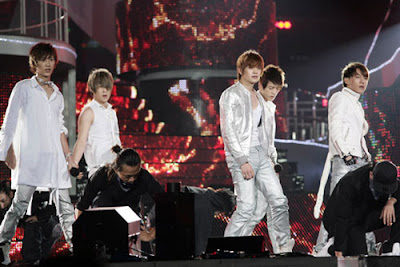 Chinese media is reporting that mainland China’s relatively recent boy band sensation Hit-5 is set to launch a new EP (mini-album) soon, following the huge success of their performances in The Same Song Festival and the China-Korea Song Festival earlier this year. Debuting exactly a year ago from this week, the 5-member boy band is also being reported by the Chinese media as recently receiving as much online news traffic as popular Korean boy band powerhouses Super Junior-M, DBSK, among others.

Signing on with a new entertainment company, the guys of HIT-5 are currently in the works on their new material. For this outing, they will be in good company with the help of famous South Korean producer and composer Lee Shang Jen, whom has worked with SM Entertainment and helped produce works for big name artists over in Korea such as DBSK, Shinhwa, Jang Nara, Fly to the Sky, MC Mong, Sugar, and many others.

Regarding work on their new material, one of the band members remarked, “While many of us are new in creating [a new album], we have faith as a group. We may not be strong individually, but I think there’s no way anyone’s better than the five of us together.”

For those of you not familiar with Hit-5, you can check out the MV of one of their popular songs below. Their clothing style and hair styles are hitting pretty close to the fad that's been a staple to Korean boy bands such as Shinee and DBSK, but it looks like their performances and singing styles have much closer influences to Taiwanese boy bands such as Fahrenheit. With the addition of a famed Korean music producer for their upcoming material, there's a pretty decent chance they they may be giving up their Fahrenheit-inspired ways and adapt a more proven formula that's done wonders to bands such as Super Junior-M.