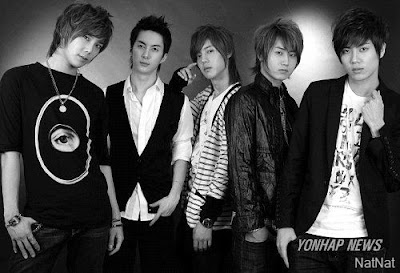 24-year-old youth named Kim Hyun Joong is not only known as the leader of pop band SS501, but also Yoon Ji Hoo, his role in the popular drama series Boys Over Flowers which is now being watched by many in 8TV channel.

However, not many know that his artist route which was actually starting from 2005 is not as easy as you have imagined. He had to defer studies in high school for one year in order to further his studies in music.

He also had fled from the house twice as his family strongly against his dream to be a bassist in a rock band after buying the second album Seo Taeji & Boys.

Although being opposed and did not received support from his family, his dream of a musician was never put away.

While still in school, he worked part time at a restaurant in order to collect money to buy a guitar. Until now the habit to save money continue to root in himself.

"I have been educating myself on how to live in the society. Even then, my age is too young to understand all the problems of adults.

"For me, every minute that go pass is money. So since dozens of years until this day, I work hard to earn a lot of money as compared to others.

"My life is not similar to my friends who prefer to have fun and busy studying in college or university. When they are busy with what the young people do, I have been busy looking for money, so I have never do things that are not profitable," he said.

Become mature before the age, Hyun Joong has gone through all sorts of difficult things in life all because he has selected a field which are not blessed by his family.

He did not regret with his decision. Looking at the name of Hyun Joong today. Never think that, his original dream to join a rock band will turn into a pop band which present song and dance and after that becoming an actor, model and also the new Asian youth icon.

Being recognized, Hyun Joong is indeed popular in Asia together with his band but, all these is right after he is involved in reality program 'We Got Married' with singer Hwang Bo whom was paired as husband and wife in the program.

Because the PD of the program, who was also the director of the drama series of 'Boys Over Flowers' was interested in his own character and offers him the role of 'Ji Hoo' which subsequently opened door more easily for him.

The drama series not only sparked a phenomenon in Korea but also Japan, Malaysia, Singapore, Thailand and several other Asian countries.

His role in the drama attracts the heart of woman when he was featured as the grandson of a former president who was wealthy, gentleman like and quiet but will care for those around him.

As mentioned by Hyun Joong, although his role in the drama is a person that learn music, but in actual fact, his actual character is quite different from Ji Hoo.

"I can not speak with women as Ji Hoo who is open with his feelings. Ji Hoo love to give romantic words but I do not.

"All my other members, laugh when watching me in action on television. Especially scenes that require me to speak in a romantic tone" he said about his first drama.

Hyun Joong admitted that he is not expert in talking to ladies.


Just finished filming the drama 'Boys Over Flowers', acceptance of fans with this man who can play piano and also guitar is not same as before. His popularity exceed many existing actors, he also won several awards as Best Actor and was selected as model and spokesperson for 13 products.

"Popularity does not come without hard work on its own. Not enough sleep and fatigue is very common. However, it is not a good habit when I was diagnosed with insomnia that causes me difficulties to fall asleep at night.

"The disease has causes me to always feel fatigue because I do not have enough sleep and was forced to wake up early in the morning to work. In order to ensure health, I tried to change to live a more healthy life," said the youngest child of two again.

His daily schedule has increase more than usual. But since his life motto is to get busy as long as he continues get lucrative returns, this has causes him to be busy with the latest single of his band SS501 which is quite unique in which each of them came out with their own solo song.

Next Hyun Joong together with his members in SS501 held their first Asia Persona Tour concerts held, which began in mid-August 2009. Malaysia are also listed as one of the concert location but until now have not a confirmed date.

Busy with concerts, in September last year Hyun Joong steal time to go to Japan to promote the drama 'Boys Over Flowers', but unfortunately when the H1N1 virus is spreading around the world, Hyun Joong was also infected with the virus and had to take off from all artist activities.

The news made his family, his management company Daesung Entertainment and his fans worried. After allowed to leave the hospital without wasting time he continue with his training for their latest album entitled 'Rebirth'.

Now, SS501 is very popular with their single, 'Love Like This' which was listed in many charts in Korea. Although already earned popularity but Hyun Joong still stepping on clear land. (Sorry I don't quite understand the 2nd sentence)

He did not has the notion to become very popular person, he said, it is enough as long as he can support his family and lives with joy.

"I am grateful for what I have today, have a family that supports me and faithful partners around me which causes me to want to work harder.

"Maybe today I am popular and successful but at the time when no one knew my future life journey. So as long as I get requests and is able to entertain the heart of the fans, I will be remain as an artist," he said.


* He pass the test to join his band SS501 when being asked about his height, weight and address. One of his member, Park Jung Min mentioned: "Hyun Joong wanted to raise his price by saying that he was not confirmed to join the band but when he saw many who was waiting to join the band, he straight away agreed to it."


* He do not like to be disturbed of his privacy and expensive things. It includes expensive gifts from his fans. He mentioned in one of the talk show in tv: "I like to receive letters but I don't like to see fans waiting infront of our home."