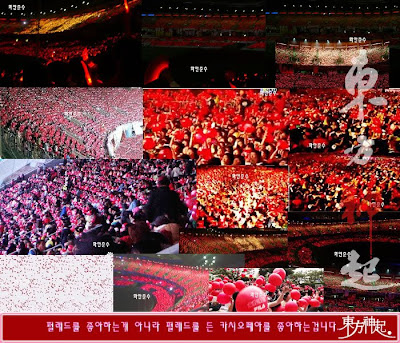 Lots of Love from Cassiopeia Felt at The Dream Concert :

There were announcement that this time TVXQ will not perform at the dream concert,
therefore, I had predicted that the majority of the fans will be there for
Super Junior (SJ) and BigBgang (BB).
When I entered the stadium, why I did not know,
but there were blocks filled with the red balloons.

Of course compared to the fans of SJ and BB,
the number of the fans were smaller,
still, with their call, their power was not less than others,
indeed I felt the number one power from the TVXQ fans.

On top of that, Cassiopeia was passing out the cloths which writes,
“Forever TVXQ!”
(Tears)

And there is more!!

When Cassiopeia spotted the Bigeast fans from Japan
seated at an Arena with their Big fan club towels of Tohoshinki,
they shook their red balloons which started to hum; bun! bun! bun!!

It made me cry again!!

Right then, Begeast waved their hands toward Cassiopeia.

Call of TVXQ at the Dream Concert 09:

I thought how happy TVXQ would have been if they could see this scene with their own eyes.
It is TVXQ themselves who created such fandom like this!
With their own powers. (With their love & unity).

When the ending song was finished and when the performers were lined up,
once again “TVXQ!” call filled the entire place.

These hot feelings and the overflowing desires of the fans
might become sources of power to make miracles happen.

That is how I felt as I left the stadium.
I send my yell to a long waiting Cassiopeia from Japan!

Cassiopeia you are truly the best and amazing!!

Miracle of TVXQ: Mnet Secret Series
In Japan you can receive this free news through cell phone registration.
Http://cjmj.tv/ (update on Wednesdays)

Source: cimi.tv + Chomin
Translated by: Junsulv@OneTVXQ.com
Shared by: OneTVXQ.com { One World. One Red Ocean. One TVXQ! }
Feel free to repost, but please leave the full credits intact. Thank you!