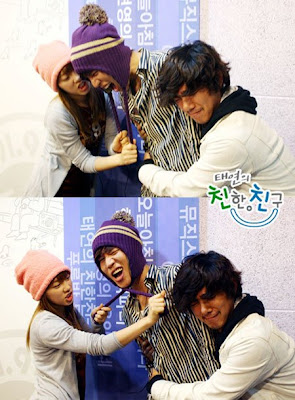 Another photo featuring So Nyeo Shi Dae TaeYeon and singer K Will has become the topic amongst netizens.

On 1st November during TaeYeon’s radio show MBC ‘TaeYeon’s ChinChin’, a photo was posted up on the noticeboard of the show. The photo revealed is the part 2(?) to the concept photos taken with guest appearances K Will and Ilak on the show.

In this photo, TaeYeon was seen playing around and teasing K Will instead of hugging him as shown previously.

The 1st part of the photo features TaeYeon hugging K Will rousing much envy from fans and netizens.

Fans responded positively to the photos, many though the 3 looked cute in the photos. Fans are also looking forward to more of the series of concept photos posted up by TaeYeon weekly.