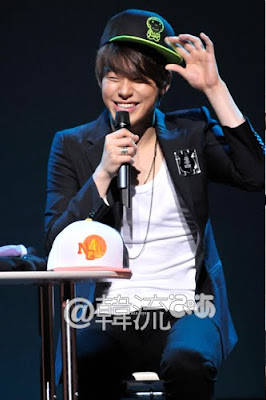 On October 29 broacast of SBS Power FM “Choi Hwa Jung Power Time” Taegoon confessed that he was not able to debut until he lost 20kg.

Before Taegoon made it into his current company, he was turned down by many agencies with only the words “You’re too bulky.” Taegoon says, “I only ate rice, and I only drank water to lose weight. With that I also did 4 hours of exercise each day. But when I finally ate again I regained 10kg.” causing laughter in the studio. Instead of going to measures to be thin, Taegoon says the only thing he does now is try to stay healthy by controlling what he eats.


He also shared that if you drink water which had red beans boiled in it, you will lose more weight than from drinking normal water.