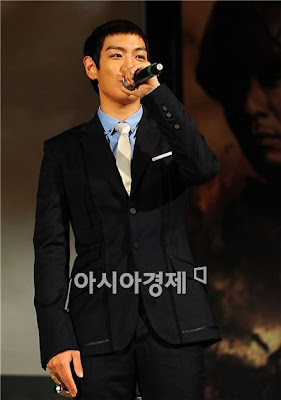 Speaking at a showcase for film "Into Fire," held Monday at Seoul's Lotte World Garden Stage, the pop idol remarked, "When I feel stifled, I come [to amusement parks] to have a good time without people knowing. People don't recognize me because I wear a mask when I come."

Actor Kim Seung-woo, who also stars in the film, described the young star as "a very serious person who, unlike young people these days, is not calculative."

Director Lee Jae-han had only praises for Choi and his acting as well, saying that he was "surprised to see a scene where Seung-hyun cries so hard that his nose is running while watching a fellow soldier die."

When asked who can hold his alcohol the best amongst the film's cast members, Hallyu star Kwon Sang-woo pointed to T.O.P and answered, "He is the best drinker. He wouldn't let me go to sleep saying he wanted to hear more about my stories."

"It was so fun staying in Hapcheon [where they shot the film] with these older guys and listening to their stories," T.O.P said in response. "It was really great to listen to their advice and learn from them."

Choi, 22, debuted in 2007 as the rapper of five-member band Big Bang which quickly became one of the hottest idol groups and considered a huge cultural icon for youngsters in Korea.

He also crossed over to acting, appearing in the comics-based TV series "I Am Sam" (KBS2, 2007) and playing an assassin in last year's smash hit "IRIS" alongside top Korean actors Lee Byung-hun and Kim Tae-hee.

"Into Fire," which opens in Korea on June 17, is a war pic based on the true story of 71 student soldiers who fought during the Korean War.