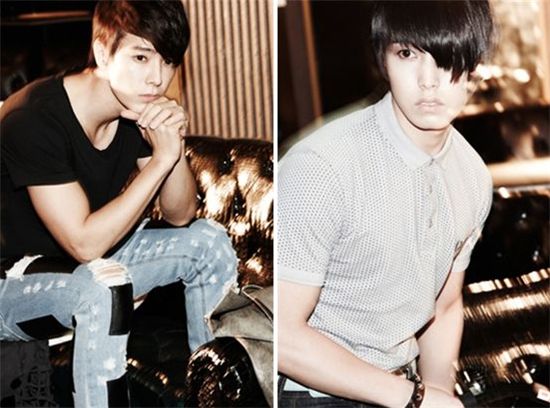 Q: Lee Teuk, Eunhyuk, Shindong, the three of you are regulars on SBS talk show "Steel Heart." But it must be difficult trying to head a segment of the program for several minutes.
Lee Teuk: We've seen quite a number of photographs get ripped up (laugh) but the more it happens, the more intense photos the public wants to see but the less the celebrities want to reveal. I got to understand what a hard time comedians must have. And it's usually hard to maintain a segment for more than three months but we're into our ninth month now so it's very tough. I'm thinking we should come up with something different.

Q: Isn't it difficult getting the guests to display their talents on the show?
Lee Teuk: (Sigh and laugh) It's really difficult. And many of them say they don't want to so we have to keep persuading them.
Eunhyuk: I had never been that interested in variety shows but I started taking part in it little by little because it sounded like so much fun when I listened to other members of my group talk about it. And then we got to appear on "Steel Heart" but I've been under so much pressure to make people laugh. The other two have been leading the segment well though. Honestly, I'm doing a lot of freeriding. (laugh)
Yesung: When I see them talk to each other, it really looks like they don't even have time to sleep because they're so busy coming up with what they should do for "Steel Heart." Shindong looks at the Internet a lot, Lee Teuk is the one who wraps up the jokes and Eunhyuk does well in spicing up the jokes. I didn't know they'd do such a good job.

Q: Some of you do musicals. Have the experiences been helpful to your singing career as well?
Yesung: They have really helped a lot. I have gotten to try acting and do more thorough jobs with practicing singing live after being in a musical. I've also gone back to the mindset of when I was a new singer after meeting seniors in musicals. There were about 40 people who were older than me on set so I started by saying hello to each of them and handing them a cup of coffee.
Sungmin: I think I've learned to act with more freedom on stage after doing musicals. I used to just sing and dance before but I have to act and calculate for musicals so when I perform "BONAMANA," I became more comfortable putting on expressions or actions that I never did before. So I want to keep doing musicals.

Q: You said on "Steel Heart" that Heechul almost quit Super Junior. Didn't you guys need time to form some sort of mutual understanding again after having been through so much?
Lee Teuk: We talked a lot while we were on our Asia tour. Everyone usually has a lot of individual schedules to fulfill so we had time to talk before and after our concerts which is when we talked about everything. Heechul and I became very close because of our Asia tour.

Q: Then had you felt awkward around him before?
Lee Teuk: Not awkward but we had always told each other that we should only be friends. We didn't talk much about work together. But with everything that had been going on, we ended up talking a lot about work too.
Heechul: Our personalities are completely opposite from each other and we haven't really worked together that much either so that's why we didn't talk much even when we're at home. We even started having different opinions on issues and after wondering why it was the case, Lee Teuk, Shindong and I said we should go back to eight years ago which was before we had debuted, and just let out everything, curse and all. That's when things cleared up. 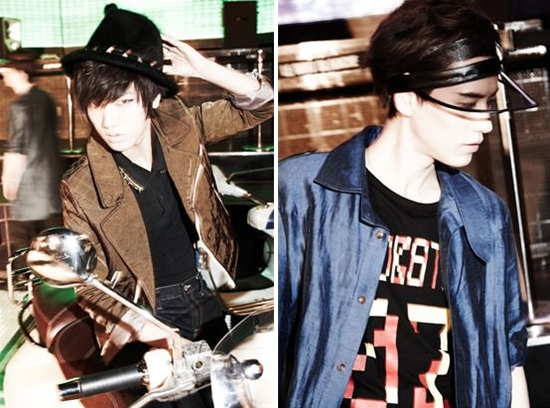 Q: What did you talk about?
Heechul: I just felt much better going back to the days we were friends and talking about anything and everything. Before, I had avoided appearing on variety shows with other members of my group because it felt uncomfortable and we had our difference of opinions. We would also have to talk about incidents we experienced as a group but there were many things I didn't know because we were close as friends but not as a bandmates on the same group. But I ended up talking with Lee Teuk and Shindong for about five hours, felt much more comfortable after that, and decided to say what we did on "Steel Heart." I have a lot of fun on variety shows these days.
Lee Teuk: He calls up producers himself these days and sets his own schedules. (laugh)

Q: Heechul, do you plan to continue appearing on variety shows?
Heechul: I'm considering making appearances here and there starting with the second season of "Family Outing" (laugh) but I know that I have my good days and bad days when I make guest appearances. And I don't have that many stories to tell so I know people would get sick of me easily if I go on too many. That's why I'm being more careful and preparing myself as an emcee. I personally would like to host a program like Super Junior's "Super Show." As a joke I tell producers and executives that I want to do a show like that. (laugh) I used to be very anxious. I was under the pressure to achieve something before I go to the army but it felt like I hadn't quite found my place yet. But once I eased myself out of those feelings, I saw myself on a much larger picture. It's my dream to act but I've also wanted to do a variety show with my group.

Q: We heard that Kang-in will be going to the army within the year. What about the rest of you?
Lee Teuk: I think we'll be going next year or the year after that rather than this year. We plan on putting in our best efforts for our careers and go without having any regrets.

Q: You're idols who are now even considering getting married. How do you feel compared to when you first debuted?
Lee Teuk: We're aging with the people who liked us from when we debuted, which I think is amazing. I'm also surprised at how I've been able to stay so long in this industry. A lot has happened over the years which has helped me to grow stronger so I don't think I'll be shaken up by small incidents anymore. I think we'd be able to last for another 20 to 30 years at this rate. We'll also have to go to the army soon and of course we should go since it's our military duty to. I hope we'll be able to say at the end of the year that we worked hard and have no regrets.