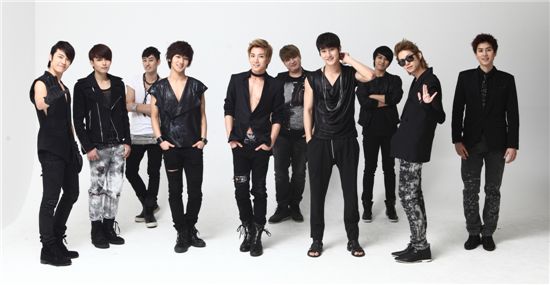 Korean boy band Super Junior have returned to the local music scene with just ten of its 13 original members, namely Lee Teuk, Heechul, Shindong, Sungmin, Ryuwook, Yesung, Siwon, Eunhyuk, Donghae and Kyuhyun. Kang-in plans to enter the army to fulfill his mandatory two-year military service, Kibum is focusing on his acting career and Hangeng is currently embroiled in a legal battle with SM.

Yet once again, they are proving their reputation as one of Asia's hottest idol groups was not falsely gained -- their fourth full-length album received 200,000 preorders compared to their previous top-selling album "Sorry Sorry" which had secured 150,000 orders ahead of going on sale.

The group sat down with reporters on May 20 to talk about pursuing their singing career with three less members and the struggles they overcame to make a bigger and stronger comeback.

Q: There are a few members missing this time. How does it feel?
Heechul: Of course we're sad. I also suffered from a bit of depression because of such incidents and I had a very hard time.

Q: A lot has happened within the team. Shindong, you confessed your love through your new album. How did your agency respond?
Heechul: I think they only let it out because they didn't know what it means. (laugh)
Shindong: If I had written it in Korean, I think they would've asked me to do it next time. (laugh)
Heechul: I had talked about this earlier with Lee Teuk but if a fan had bought an album, saw that Shindong had written a code so cracks it to see he had asked someone to marry him... We're lucky if the fan doesn't rip up the album. (laugh) Shindong actually kept apologizing to us before we gave our comeback performance for "BONAMANA."
Lee Teuk: There could've been mixed responses to what he did but we're grateful that there have been a lot of good articles on it.
Shindong: I've become a romantic guy thanks to them. I'm thankful.

Q: Did you all know about this?
Lee Teuk: Heechul did.
Heechul: I agreed to Shindong when he told me he wanted to do this. I told him it's great. A guy should confess when he has to. But when I saw what it [the code] read when it was deciphered... was it a sight to see. (laugh) I didn't know it was going to be that serious.
Lee Teuk: We were in a photo shoot when he was writing it. He kept looking up something on the computer keyboard. 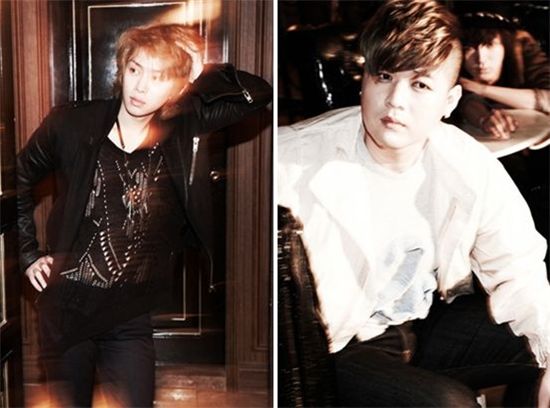 Q: Do you plan on getting married if for example, the song does well?
Lee Teuk: Like getting married if we sell over one million albums. (laugh)
Shindong: I will if we sell under one million. (laugh)
Heechul: I'll sing the nuptial song. Love so hurts... (laugh)
Lee Teuk: It was only possible because it was Shindong. He's the one who gave our group a friendly image. Everyone else is slim and good looking so there was a distance between the public and us...
Heechul: It sounds like you're dissing Shindong.
Lee Teuk: No, I'm not dissing him. (laugh) I'm just saying that we must have Shindong on our team for his friendly image.
Shindong: I'm grateful that you think of me like that. I'm very grateful toward my group because I hear the word 'pretty boy' wherever we go. (laugh)
Heechul: Now, let's not be too grateful toward each other. (laugh)

Q: The group went through a lot before this album came out so I think you must've felt different preparing for it. How did you feel while rehearsing?
Eunhyuk: Everyone was feeling different. It was great because we practiced with the determination we had when we first debuted. Donghae and I are in charge of the choreography so we had to take the lead in showing that we were going to work really hard this time. We got almost no sleep preparing for the album this time.
Donghae: I was so stressed that I even had nightmares. I was very shocked because I dreamt that we were on stage, rehearsing for our comeback performance, when everyone started snickering at us.
Lee Teuk: Eunhyuk said he had a similar dream too. I was very surprised that everyone was under so much pressure.

Q: Some poeple are pointing out that your title track "BONAMANA" is similar to your previous song "Sorry Sorry."
Lee Teuk: I know. But I think that's our style. It's an extension of "Sorry Sorry" but also the last word to it.

Q: There's a dance move which looks like you guys are skating.
Lee Teuk: The choreographer said he thinks of skating when he thinks of Korea. (laugh) 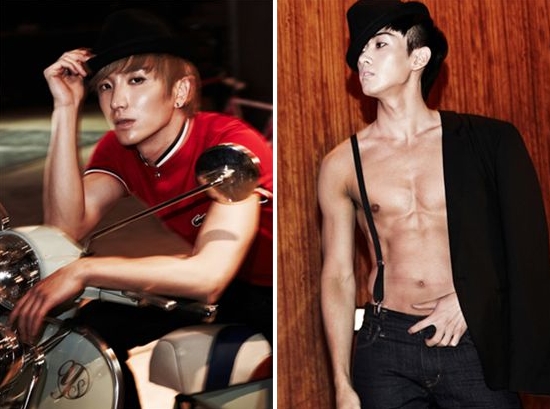 Q: The choreography for "BONAMANA" looks like it's more complicated than before. Did you not have a hard time memorizing it? (laugh)
Eunhyuk: It was supposed to be even more difficult. We changed some of the difficult moves so they'd be easier because we had to keep some of the moves which were key to the song. The choreography was so difficult that every round of song we danced to was extremely tough. It felt like we were constantly running full speed.
Lee Teuk: Doesn't our strength lie in the fact that we can pull off even the most complex choreography? (laugh) The choreographer said our moves this time is about energy. The person who came up with the choreography for "Sorry Sorry" came up with our choreography again this time. We're very grateful to him because he was supposed to join the Michael Jackson tribute concert.

Q: Isn't the new song hard to sing because there is a bounce to it that you have to ride with from the very start. Especially for the members who are used to singing ballad songs, how was it?
Kyuhyun: In my case, I'm better at singing ballads but it wasn't too bad because I've been a dance singer. I have been practicing constantly. And I think I've been able to show diverse sides to myself through this album because there are a lot of ballad songs too.

Q: How was it singing Yoo Hee-yeol's "Good Person"?
Kyuhyun: I was under a lot of pressure because it's such a classic that I couldn't mess up on it. We talked with the directors for a long time about the song, saying a certain part should be sung with such and such emotions, that we sounded we're smiling too much in another segment, that this is a sad song.
Lee Teuk: We edited the song quite a bit because it's a classic and Yoo Hee-yeol hosts his radio show right after ours so he asked about it too. After our album came out, he said he listened to our version of the song and when we asked "It's not as great, right?" he said it was good so we were thankful.
Yesung: When I heard we would be recording "Good Person," I thought it would be Park Hyo-shin's "Good Person." (laugh)