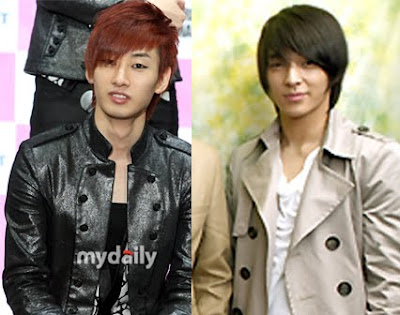 When talking about how becoming a singer affects your daily life, Jonghoon asked Eunhyuk “I want to gain weight” which Eunhyuk said “I have the same problem. Do you know any effective method for this ?”, Jonghoon then admitted “I has tried to eat a lot of ramen before sleep but I can’t gain weight at all”.

After hearing the answer, Eunhyuk had nod his head and said “So I will recommend a character to you. I was called ‘Anchovy’ ” and asked Jonghoon to choose one among the nickname “Anchovy, Cutlass fish, Flying fish”. Jonghoon said “I have seen Cutlass fish before”, thus choosing that nickname among the three which made everybody laugh.

Then Eunhyuk said to Jonghoon “I want to be a main MC like Leeteuk hyung” which Jonghoon answered “So let’s continue with your ‘Anchovy’ character and loose more weight than (you are) now”.