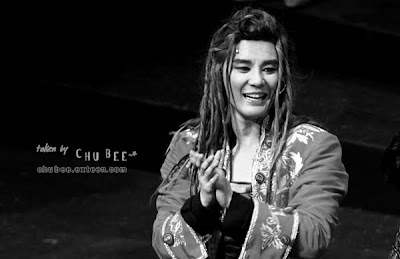 The “it” item of today’s culture is idol groups. (omitted) These days, idol stars seem to have fallen head over heels for musicals. (omitted)

Many have written positive reviews for Xiah Junsu’s musical acting, which began on the 26th last month, stating that he was so good that it was hard to believe that it was his first performance.

One of the reasons why idol stars should not enter the musical market is because “If that person is set as the main character only because of the fact that his or her ticket power is great, the identity of the musical could be damaged.” Many experts have stated that the majority of idol group members who participated in musicals last year did not pay much attention to the execution of their roles.

Musical critic Won Jong Won stated, “I don’t see any interest from idol stars who are participating in musicals to use this opportunity to expand their hidden talents and skills.” He also said, “Using them as a marketing tool only to sell a lot of tickets will bring a big blow not only to the musical market, but also the idol star’s image.

The foundation of these low reviews of idol stars on the musical stage stem from the fact that they are almost ‘isolated’ because of the fact that ‘They do not rehearse as much as they should because of their busy schedule’ and ‘They are so immersed in their star quality that they treat their fellow musical actors unkindly and do not work well with others.’ (omitted)

The reviews for Mozart!’s Xiah Junsu are mostly positive.

One staff said, “It may be because he was a trainee for such a long time that he has a positive and active attitude and he can pick things up extremely fast.”

Xiah Junsu also spent some time in the hospital because of stress that accumulated from many things including rehearsals. He would repeatedly go to the hospital for a day from fatigue and then perform the next day.

The staff member also said, “Xiah Junsu works hard every day to break the prejudices against idol stars in the musical market,” and “I think his hard work paid off with great results.”

Conclusively, ‘Mozart!’ is being labeled as a successful musical that is attracting large crowds of audiences.

Xiah Junsu proved not only his ticket power in ‘Mozart!’ but his abilities and competence as a musical actor.