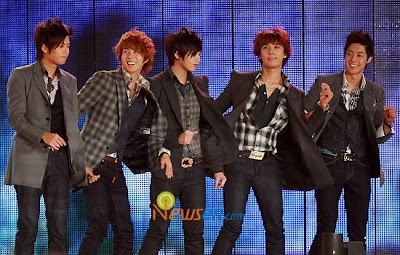 SS501 performance has captivated 2500 audiences with 500 people among them is reported to be SS501 fans from Japan and China.

SS501 Kim Hyungjoon,”I’m so happy to see the overseas fans still cheering for us despite the cold wheather here. We’re so happy to be the last performer in this great event and we’ve commited to give an even more better performance in the future for our fans”.

SS501 performed their recently released single ‘Love Like This’ and their popular single ‘ A song calling for you’ which of course has made their overseas fans happy.
‘Visit Korea Year 2010-2012′ Opening Concert will be broadcasted by MBC TV on Nov 13,2009 at 6.30 pm local time.