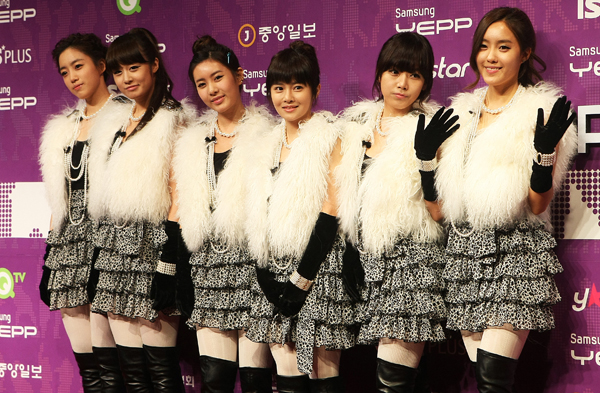 T-ara spent 8 hours in the studio for their brand new CF shoot. Sports Chosen caught up with their while their shoot was in progress for a quick interview.

With SoYeon surviving the swine flu and Jiyeon's KBS 2TV drama "God Of Study" shooting, it's rare to see all 6 members together, but today all members gathered. They arrived at 8:30 AM in the study, quickly getting on smokey makeup and the youthful sporty appearel, which is a lot different from their stage costumes. T-ara make a total of 10 costume changes in the shoot, but the atmosphere remained good thanks to T-ara's bright personalities.

Recently, SoYeon was one of the victims of the swine flu outbreak, she was taken good care of today during the photoshoot. Soyeon said, "Thanks to the many people worrying about my health, I'm happy I have healed," she said smiling brightly. "8 days of sickness, at 5 AM I would wake up so sick and dizzy. It's lucky I recovered so quickly and I'm very thankful for the great conclusion."

▶ What were the products you were ask to endorse?

Nene Chicken, cosmentics and clothing ads. New Year's Day brought the announcement of 3 simultaneous CF contracts and T-ara gaining a whopping 900,000,00 KRW. We asked T-ara what kind of ads they wanted most, and they all responded with "mobile phones."

Qri also said, "I want to advertise on cell phones," she continued, "The ones I like most though are the ads where we get to eat good food."

▶ What do you eat for lunch during your diet season?

From 11AM to 3PM T-ara finally began to shoot the video for the promotions. T-ara members must've been hungry, because they had lunch along with fruit juice delivered. The girls ate Chicken Breast Salad for their lunch. Hyomin also has sweet potatoes, which she brought to the shoot, while Soyeon brought her own lunch of tomatoes, potatoes and a variety of fruit.

Boram said, "We have to control our diets and keep certain meals periods. I've slimmed down 3kg by doing this," she stated shyly.

Qri said, "I believe do not take off the weight and keep a steady diet. I'm trying to eat well and I practice, because it tends to be a little hard trying to keep up the slim bodyline."

On the set of the CF the T-ara members all had a distinct look. The girls just got beack from filming God of Study the other day and they were quite tired. Although the girls only had at least an hour of sleep the previous night, they were still expected to arrive for this event. Due to the cold and lack of sleep, Jiyeon had contracted a cold from extensive shooting for her drama.