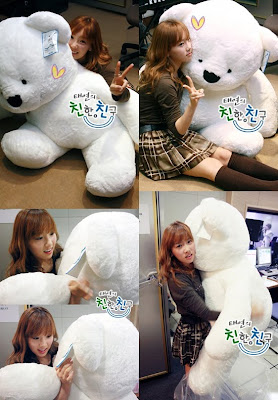 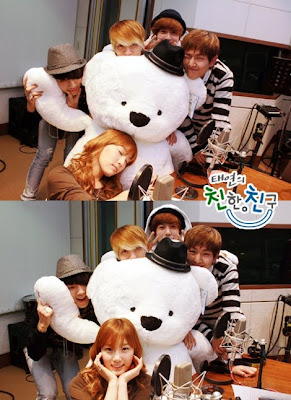 SNSD Taeyeon's bear doll picture is a topic of discussion among fans.

On the 21st, Taeyeon, who was DJ'ing her own MBC radio program 'Taeyeon's Chinhan Chingu', revealed her bear present.

On the bear Taeyeon received, there is no hint of the sender's name or a message from them. It just has the label that states, "Please allow 2-3 days to dry after washing"
The bear is 2 times bigger than Taeyeon and the images of her having a difficult time taking the doll out of it's package are delighting fans.

On this day, while Taeyeon DJ'ed her own radio program, she sat the bear doll on the seat beside her as she patted, used the bear as an armrest, and leaned against it. The affection and skinship Taeyeon had for the bear showed that she was very happy with the present.

Also, there are a lot of fans' reactions to the pictures. "It's so cute seeing Taeyeon taking a doll that is bigger than her out of it's package", "That bear must've saved a nation in it's past life," showing signs of jealousy while other, more affectionate messages were received.