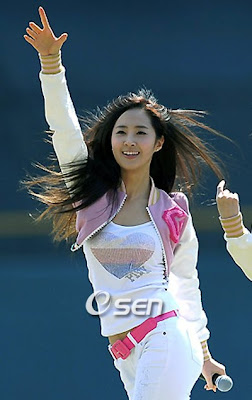 Recently, There was a survey conducted at music site site Bucks and the survey was "Which female singer fit's best as a baseball pitcher?" Netizens voted and they have chosen their pitcher.

SNSD Yuri got first place taking 48.5% of the total votes, out of 2588 netizens who voted she received 1256 votes and achieved an overwhelming response and lands her at first place.

In Second place is After Schools UEE, where her father is a coach of a baseball tea which caught a lot of interest from netizens.