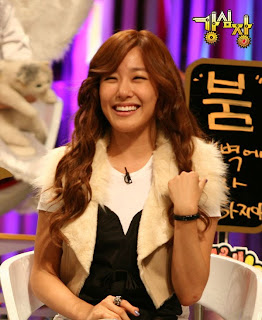 SNSD Tiffany's surprising statement that the other members are swindlers/con artists cause surprise to many.

The broadcast of SBS's Kang Shim Jang on the 3rd will show Tiffany saying "The other 8 members in SNSD are swindlers" and "It isn't the first or second time that the other members gang up on me".

Tiffany said "They made fun of me on many occasions when I am faced with difficult Korean words. A while ago, I didn't know the meaning of "ByuRuk" (flea) and they told me it is like Marine look, School look. It is a type of trendy fashion. I believed them. I would have made a big mistake!" The confession had made the studio burst out in laughter.

Tiffany continued to talk about the incident as well as some other shocking confessions.

Note: The ByuRuk incident is during one of the HB episode if I am not wrong. Check back ~3 or 4 episodes.
Note 2: They are all pulling her leg, it's for fun. Don't take this the wrong way.
Tags: Snsd, Tiffany
Share
Previous articleNext article