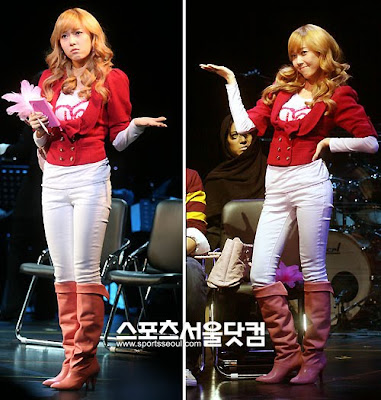 SNSD Jessica who has just had her debut showcase for musical “Legally Blonde” on October 22 said, “I want to share a stage with Kyuhyun oppa from Super Junior”.

Legally Blonde is a Hollywood blockbuster starring Reese Witherspoon which tells a story about an ordinary blonde teenager who got into Harvard University to win her ex back. Jessica, playing the lead role, impressed her fans with her acting skills in the showcase. With this being the first musical she has ever been a part of, we couldn’t see her nervousness on stage as she naturally transformed into “Elle Woods”.

In the recent interview with SSTV, when asked whom she would like to act together with in the future, she directly replied that it would be f(x) Krystal, her own sister. She also added, “If I have to choose from another group, I would pick Kyuhyun oppa from Super Junior. He has such a lovely voice and he will definitely do well on stage”.

The musical will be performed on November 14 at the Coex Atrium.