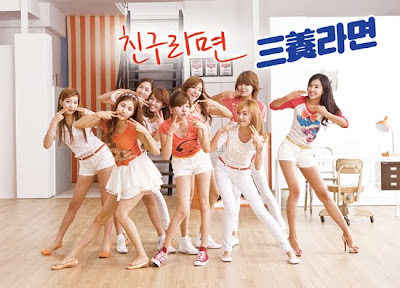 A Japanese blog had stated that the music used in SamYang Ramen CF with SNSD had infringed copyrights. The background music in this CF is similar to the one used in the hit Japanese game "Bubble Bobble".

The advertisers had responded to this claim that they had received permission to use this music and had paid for the use of the music to the original owner of the "Bubble Bobble" track.

But as the blogger had not checked out the facts right before publishing this piece widely, it had led to Korean and Japanese netizens starting a verbal war online. An official had expressed sadly that "It's absurd. The CF had received permission to use the music." and that "The Japanese blogger was mistaken".

The SamYan Ramen CF had been filmed with the concept of "Friends Ramen, SamYang Ramen". SNSD members used the '보글보글' song and the '보글보글' dance to chase away boredom in the CF. The interesting yet easy to catch on lyrics in the '보글보글' song by SNSD had created interest among public.