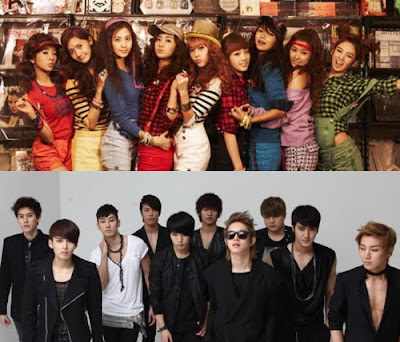 For the first half of the year, only 2 idol groups have surpassed the 100,000 mark for album sales, and from the counting of album sales from January to May, only SNSD and Super Junior were able to achieve to surpass the 100,000 album sales mark.

SNSD who made their comeback last January 26 with their second album "Oh!", according to hanteo, after 2 months and 27 days, their album was able to surpass the 100,000 album sales mark, Super Junior however was able to achieve this after 1 week after their album release in May.

After 2 months, SNSD's 2nd full album was able to reach 117,077 album sales. Their album was a success after the hit song "Oh!" sky rocketed to the top of music charts. Fans went crazy for their new album which resulted to the impressive album sales.

Super Junior after two weeks of has sold 106,861 album sales with their 4th album "Bonamana". Their title track "miinah" was received very well and Super Junior had an impressive album sales just after 2 weeks since it was released back in May 13, 2010.

Meanwhile, their other albums are also doing well. SNSD's repacked album "Run Devil Run" also had impressive sales. After it was released in March 16, 2010 until now after 2 months and 26 days it has reached 47,455 album sales.

Super Junior's Version B which was released on the 20th of May has also received explosive interest and sold over 37,410 copies.

Meanwhile, other idol groups also had good album sales, 2am also had good feedback for their 1st mini album "Can't Let You Go Even If I Die" went really well selling over 34,304 copies. Rain followed next with his special mini album "Back to the Basics" has sold over 32,633 copies.

Meanwhile, SNSD holds the all time record, SNSD who debuted in 2007 has the top spot for the first half for all of their albums in total reaching 180,051 in album sales from January to May.

Super Junior who debuted in 2005, followed in next with their total album sales this year which just started this May with a total of 156,036 album sales.