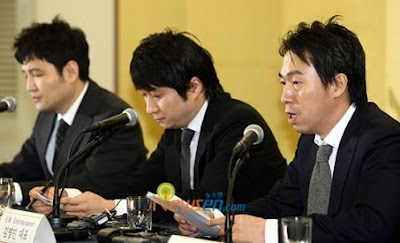 SM Entertainment has officially given its last notification to the 3 members of Dong Bang Shin Ki.

SM Entertainment held a press conference on 2nd November in Seoul 63 Building at 3pm. At the press conference, SM Kim Young Min representative and SM Japan Nam SoYeong president, SM Han SaeMi and Jung ChangHwan directors were present.
At the press conference, they revealed their stand about the case brought up by TVXQ members Hero JaeJoong, Xiah JunSu and Micky YooChun as “a hoax exaggerating on issues of slavery and human rights.”

SM Kim YeongMin rep said, “The 3 members will be able to continue their individual activities with the application for disposition of the contract terms. But they have to carry out activities for Dong Bang Shin Ki through SM.”

With that Kim said, “We will request for the 3 members to give an answer by 12th November.”

He also added, “This lawsuit did not start due to issues of slavery and human rights, but due to the individual’s cosmetic businesses. The 3 members were using the contract terms to benefit themselves in the lawsuit, but what they have in mind all along is their businesses and profits.”

He continued, “The 3 members have gone on what they said a vacation to China in January in 2009, that was when they took part in a cosmetic business. And we know about that through photos of their company exposed. And through the website of their company, we got to know that their titles were directors and they even have their own namecards.”

Representative Kim said, “For this lawsuit, the 3 members also even think of changing the content to contract to benefit themselves. And previously in April, during their concert performance in China, the members also tried to declare trust with other junior singers in the company.”

“We have expressed our concerns of damaging the image and problems arose from the 3’s cosmetic businesses. We will confirm the contract and starting from any possible problems that may arise, we want protect the members. But we don’t see any effort from the 3 members with them refusing to reveal their contract.”

“This lawsuit is a hoax on the Korean society by exaggerating on the issues of human rights and slavery.”