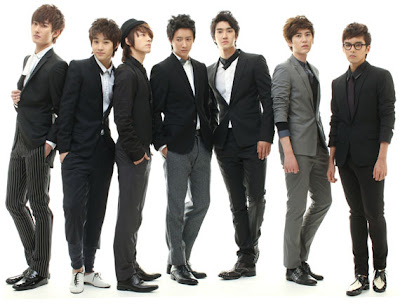 We actually came to Hangzhou twice but we didn't even have a chance to see Westlake(xihu) at all. Checked in the hotel at 4AM in the morning and we still have to secretly use the back door....on the stage, they perform glamorously. Not on the stage, they avoid the light. This is Korea's popular Idol group, Super Junior-M's behind the camera's life. Yesterday, at around 20:15, after waiting at a not very popular wine shop for more than an hour, 7 of the SJ-M members finally accepted our exclusive interview. The entire interview took around 10 minutes, which was short of 300seconds of the agreed time.

Debuting for less than 2 years, SJ-M has been the most popular Korean group that has swept across China. Be it the China members or Korean members,both has fans that equivalents up to 7 digits. Each and every of them has their own fans and this has made many of the stars(in china) envious.


To judge whether a star is famous or not, we have to look at how they are appearing. This time, SJ-M, who have come just for a concert, has received very good treatment. "Each of SJ-M's members stays in a suite. There's a total of 18 people(including the managers and etcetc) and 12 rooms had to be prepared."someone reveals. A 7 member group has received the same treatment as 7 individual stars. "There was once when we performed at Shanghai, we had to use 10 bodyguards to form a human wall so that we can let SJ-M move in and out successfully. The bodyguard fees are $500 for each guard."

Behind all the glamour was being unable to leave the hotel. This time at Hangzhou was also no exception. Besides the hotel and the performing venue, they were unable to go anywhere else. "(I) want to go to the Westlake(xihu)!" The first question was to ask about what their impression of Hangzhou was and Siwon's answer in a language he wasn't familiar in gave everyone a shock. He was saying and laughing away. "I really want to go to Westlake(Xihu) and play! I heard that it is very beautiful but every time that I come, I never had a chance to visit. I felt that it was a pity." Hankyung talks as a endorser as usual. To them, even getting a glimpse of the Westlake(xihu) was a difficult task.

SJ-M's every movement seems to be grasped by the knowledgeable fans forever. Yesterday,while some reporters were waiting for the lift, there was already 10 of the fans stalking the lift. One of fans said "For now, even if its the China and Korea fans communicating with each other, when they registered in a plane here, the other side will know it as well".

To ensure the quality of the performance, SJ-M will usually reach the place the night before the performance. This time, they also travelled at night. Yesterday at 3AM,they rushed from Wuxi to Hangzhou. When they reached,they were shocked to see a huge amount of fans waiting for them. "Very shocked and very grateful!"said Zhoumi. What's even shocking that they don't know was that there was 4 cars of fans that followed them all the way from Wuxi to Hangzhou.

According to the hotel's person-in-charge, he reveals that SJ-M's fans are like cows*. They didn't even blink their eye when they booked a hotel room that costs up to 1000rmb. Due to the limited amount of rooms, the fans that didn't managed to book a room refused to leave and stays at the lobby. "I don't even know what those fans are thinking..they are mostly girls born after 1990. There was this girl from Beijing who sat at the lobby and shouted at those people who was curious." This person-in-charge has a face full of curiousity.

Playing "hide-and-seek" with the fans seems to be a habit to SJ-M. Coming to Hangzhou for the first time, the 7 of them separates and live on 2 floors. "The artistes stays on the 16 and 17th floor. We do our make-up on the 29th floor but every floor seems to have fans." someone reveals, "every door seems to have a fan who is on a stand-by. If there was any movement,the fans will inform the others using their cellphones."

Checking into the hotel has to be fast and secretive. When leaving the hotel,you have to be fast and secretive as well. From the 29th floor, you'd have to use the lift till the 5th floor. After that, you'd have to use the worker's lift and get out through the back door. Last night, we wanted to use the same lift as SJ-M to go down but in the end, we got "chased" out by them. The reason was:The lift was fully occupied by them! When playing hide-and-seek with the fans,SJ-M's movements are relatively strict.

11th of November,2009 Kangxi Festival World tour·Hangzhou's stop will be at at the Yellow Dragon Sports Centre. At that time, SJ-M would have the status of the opening group,as well as, guests. About the upcoming party-like performance, Zhoumi and Hankyung's smile shows that they are very excited.

"I've watched "Kangxi is here" since I was in High School and I like Xiao S a lot. Actually,we are supposed to go to Taiwan in December to promote our new album and I was hoping to see Xiao S". Zhoumi couldn't keep it in and started to cut in. "We will watch almost every week's "Kangxi is here" and we will also talk about it together". Hankyung adds.

The hot MC, Xiao S, is very straight-forward. Sometimes,even if the person is a kid or a grown-up,she wouldn't let them off easily. Are you guys afraid that Xiao S might take advantage of you or are you worried that you might not be able to withstand her hotness? "We understand her a lot and we know more about her than she knows about us. So, we are not afraid." Zhoumi laughs happily.

With the backs of many fans, about performing on the same stage with Lin Yuchun and Zhou Bichang, SJ-M is not worried. "We've actually met Lin Yuchun on a Asia Music Programme before" Hankyung reveals. All of the Korean members knows who Lin Yuchun is but they aren't very familiar with Zhou Bichang.

*I think it meant that the fans are very stubborn