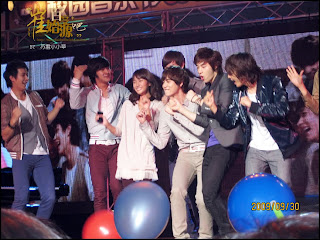 Clad in suits with dark-coloured pants and sporting stylish hairstyles, the seven fine gentlemen of Super Junior M ceremoniously released their first mini album in Beijing yesterday. The seven members also brought their own personal items to give away as gifts to lucky fans.

Hankyung, Siwon, Donghae, Ryeowook, Kyuhyun, Henry and Zhoumi – these members of SJ-M have won the “Most Popular Group” award on various prominent award ceremonies in China since the release of their first album last April. Their image for this new album consists of SJ-M’s usual style with attire in the colours black, white and gray just as before, but with the addition of fashionable accessories such as framed glasses and bowler hats. It is reported that in just three days after its release in Taiwan, this album clinched the top spot on every notable album sales chart such as that of G-MUSIC, FIVEMUSIC etc.

During the event, group member Donghae gave away his perfume bottle, while Hankyung gave away his Korean dictionary. Siwon, on the other hand, gave away a lip balm that he has used, making fans extremely excited. Hankyung then picked up telephone calls from fans during the call-in segment of the event. With his fluent Mandarin, he managed to make the callers believe him when he said they had dialed the wrong number.