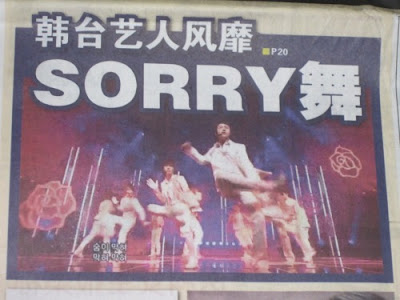 South Korean idols Super Junior brought about the “Sorry dance”, the ‘hand-wringing, leg-patting, and encircling hands “Trilogy”#’ becomes a hit, and even Jacky Wu, Patty Hou and Jolin Tsai* are dancing to this too!

After popular South Korean group Wonder Girls led their new song “Nobody” to fame across Asia, idol group Super Junior (SJ) released their new album “Sorry, Sorry” in March this year. The title song shot to fame from South Korea to Taiwan, Hong Kong and China, and was even crowned first on South Korean music charts (t/n: the 8 weeks consecutive should be from Sorry, Sorry AND It’s You) for 8 consecutive weeks. Apart from 13 good-looking boys being a reason for their success, being a dance song with a heavy electronic beat matched with hot dance moves is another reason why this song is popular, making the “Sorry dance” almost a national dance, shooting to fame rapidly!


Also, SJ was invited to Taiwan in June to perform in the Taiwan Golden Melody Awards, and while there were criticisms regarding their lipsyncing performance at the awards ceremony, the popularity of “Sorry, Sorry” was not affected at all, and instead, continued shooting upwards, with many Taiwanese artistes wanting to imitate the classic “trilogy” moves “hand-wringing, leg-patting, and encircling hands”# on shows with 100% entertainment value, fully displaying its popularity!

SJ’s management SM Entertainment has held auditions in many places before, with competition during preliminary rounds being very fierce. Many have since left (the company) because the wait for debut was too long, and even if they do manage to make their debut, if they do not shoot to fame, they may also be cast aside, but if they are able to become one of SM’s popular idol groups, they will display multi talents like singing, dancing, being an MC, acting, being a DJ etc.

Making their debut at the end of 2005, SJ members have an average height of 1.8m, and aside from being able to sing, the members Leeteuk, Heechul, Han Geng, Yesung, Kangin, Shindong, Sungmin, Eunhyuk, Donghae, Siwon, Ryeowook, Kibum and Kyuhyun are all also able to take up the posts of MCs, DJs, runway models, actors etc.

While the large size of 13 is rare amongst idol groups, they are popular across Asia, and SM has even used the special concept of dividing the members into smaller sub-groups to release albums; such as Super Junior – K.R.Y. with their sweet voices as their main concept; or Super Junior – M, which is led by Chinese national Han Geng and targets the Chinese market.

SJ also has rather active solo performances; Leeteuk, Kangin, Eunhyuk and Shindong are active in variety shows and radio broadcasts; Siwon participated in the Hong Kong historical film “A Battle of Wits”; Heechul and Kibum with outstanding drama performances such as in “Snow Flower”, “Bad Family”, “Golden Bride” and many other popular dramas.

“Sorry MV” has hits over a billion
The reporter went online and found out that on YouTube alone, there are as many as 20 versions of SJ’s “Sorry, Sorry” MV##, with global hits totalling over a billion.

Besides that, Taiwanese gag stars Na Dou, Chen Han Dian and Ah Ken, among others, formed the group “Super Juni儿” (pronounced: Super Juni-er) on Taiwanese variety show “Quan Min Zui Da Dang”*, and performed a poor quality parody** of “Sorry, Sorry” and in the performance threw in nonsensical Korean, to the laughter of the audience; other related parodies have also attracted over 500,000 hits, and is successively being imitated or made into poor quality “Kuso”** parodies, with names that play with the title such as “Shou Li Shou Li” or “Xiu Li Xiu Li”***!

notes:
# ‘Hand-wringing, leg-patting, and encircling hands “Trilogy” ’ – the 3 main dance moves in the chorus of Sorry, Sorry
## “20 versions of SJ’s “Sorry, Sorry” MV” – I think the reporter means that there are about 20 user-created covers and parodies of the song, I’m not sure if fan-made vids are also included