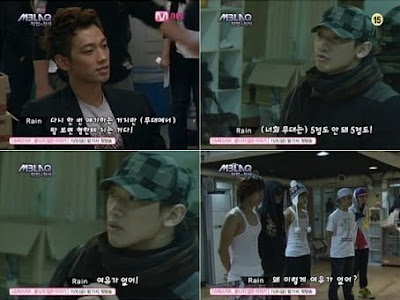 On the reality documentary ‘Art Of Seduction’ featuring MBLAQ aired on 4th November, Rain was seen being strict and giving advice to the group.

MBLAQ is a group produced by Rain, and they performed for the first time during Rain’s concert in Seoul on 9th October, they then had their debut stage on 15th October with the song ‘Oh Yeah’.

And during this documentary episode, it shows Rain and MBLAQ before and after these 2 performances. Rain said before his concert to the MBLAQ boys, “If you look at the ground, it means you have lost to me.” showing them encouragement for their first performance.

But after their first live performance on tv show, Rain made a 180 degrees change into a strict producer. After the performance he said, “I can’t even give 5 points out of 10 points for it”, “When I was watching it, I have many dissatisfaction”, “You don’t look like you are enjoying it but as if you were doing it as a chore”, “Others don’t know how I have taught you”, “Really really cannot make it” etc

With the reveal of Rain’s features as a strict producers, TV viewers commented, “He looks like a boss”, “Rain after all. Even his scary and strict features look cool” etc

* “Lol, I bet he learnt some of those from JinYoung hyung”
* “He must have got it this way from JYP too hh”
* “I like Rain’s new hairstyle”
* “The 7th photo – the reporter an anti fan?”
* “Honestly I watch this documentary because Rain appears in it”