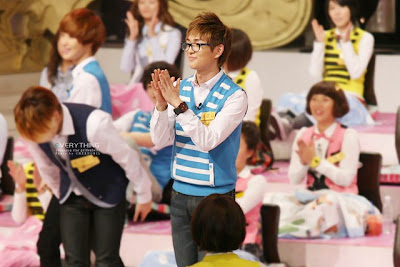 On the 19th at the recording of Star Golden Bell, Onew showed outstanding wit & skills. He was especially outstanding during the 'Match the initial sound' corner. On this day the initial sound that was given was 'ㅈㅈ.' Unlike other guests, from start to finish Onew was confident and gave correct answers to the initial sounds and made it to the final obstacle.

Onew who was the final person even answered the final question correctly which was about toothbrushes and its origin. Before Onew wrote the answer down, MBC Ji SukJin who returned to Star Golden Bell said "Putting SHINee's reputation on the line...," "if you lose it will be humiliating so leave out SHINee's reputation" and gave the audience laughter.

On this recording, Onew also got picked as "the most embarrassing member" by the SHINee members. SHINee member Key said "Onew always walks coolly in front of many people but in the end he trips."

On this episode all members of SHINee, Lee KyungShil, Solbi, Shin Bongsun, Suh Hyolim, Kim Taehyun etc...appeared together. The airing date is on the 24th.