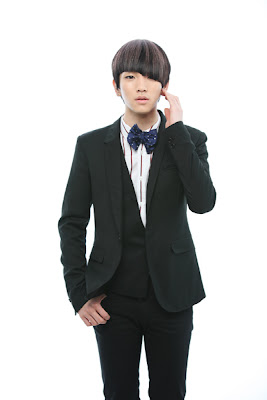 SHINee member Key has revealed through an interview conducted with TV Daily on the 23rd at a hotel in Apgujeong about his close relationships with members of f(x) since their trainee days.

When asked about the video taken in the waiting room of the Dream Concert where he affectionately praised them, Key said "When I was still a trainee, I was already very close to the members of f(x). We will confide with each other our troubles."

As such SHINee's leader Onew said with a laugh: "The members [of f(x)] all calls Key as their oppa."

Key said: "Even though I am close to all the members of f(x), but with Suli, we are like siblings, having gone though the very difficult phrase of being a trainee together and thus became a form of support for each other."

SHINee's Jonghyun said: "When Key converses with f(x) member Amber in English, he will always mix up his nationality." With that, everyone started laughing. Key and Amber often joke around, sometimes smiling and laughing like kids.

On another note, Key's favourite song in their 3rd Mini Album is "Jo Jo". "Composer Kenzie's style is that of a European dance, the roller and retro style of song is not only appealing to teens but also reaches out to people of other age groups. We hope to receive more love with this."