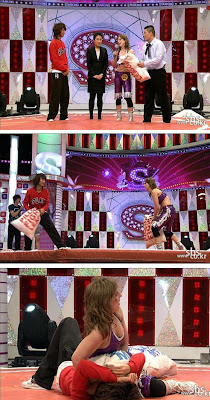 In the new episode of SBS TV "Star King" show, a Canadian lady amazed all the guests by challenging other artists over a pillow fight.

In response to her threat, Minho asked for a match, "I'll show you what a real pillow fight is."

Everyone was wondering what just happened after the whistle rang to announce the start of the game. An amazing sight unfolded with the sound of head hitting the pillow.

Artists stood out of their seats to see Minho seriously confused by the hardness of the pillow, invoking his swing. The lady action was quick and her skill was flawless to the point that without realizing it, Minho was already on the floor.

It was then informed that Charlie (26) was Canada's first official Pillow Game Champion. The game may be considered just for fun in other countries but in Canada, it was designed as a full pro active championship.

SHINee Minho's pillow incident will be aired on 6th February at 6:30 PM on SBS "Star King". Don't forget to check it on your TV.