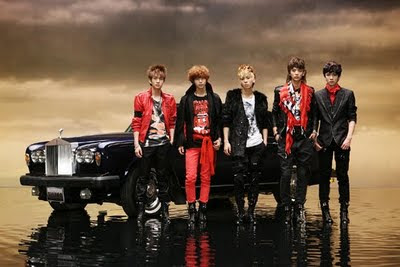 Key of 5 member group SHINee reveals, "I have never once thought of SNSD and f(x) as 'girls'.

During SBS Live FM DGDR on the 11th November, Key revealed his thoughts when the DJs asked if dating was not allowed in SM Entertainment.

Girl group 2NE1 had previously revealed that they could not date for a 5 year period. With this mentioned, SHINee could not hide their surprise and said, “We do not have such a rule.”

Key said that “Even if it is like this, I have not thought of SNSD and f(x) members as ‘girls’”, indicating that there is no chance of couples. He continued to explain that for SNSD and f(x), they have known each other for a very long time and while training together, their relationship have become like family, or like friends.

The SHINee members also talked about how they feel awkward when they called “Sunbaenim” by new idol groups. Key said that new groups would come to them and say “Sunbaenim, please look after us well” and they would respond in kind rather sheepishly.

Also, SHINee’s magnae Taemin said “ f(x)'s Krystal and Sulli are just one year younger than me, and when I see them on broadcasts, I find it really intriguing” as he has only debuted over a year but now he already has juniors/hoobaes.