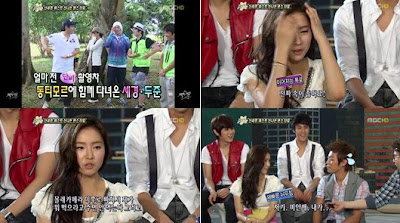 On MBC TV 'Section TV Entertainment messenger' that was aired on the 21st, they visited the set of BEAST and Shin Saekyung's chicken CF site.

When Shin Saekyung claimed, "We recorded a hidden camera, and afterwards, he got upset so when I gave him something to eat, he said he didn't want to eat". Yoon Doojoon apologized by saying "I am sorry" and blocked Shin Saekyung's mouth at the same time, causing people to laugh.