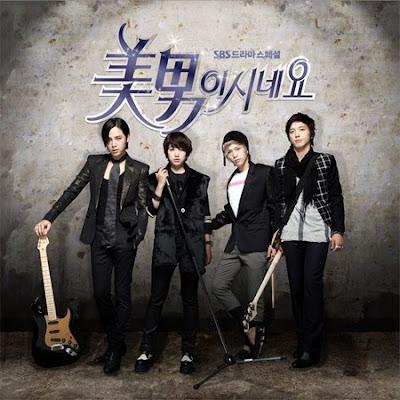 It seems like SBS weekly drama 'You're Beautiful / You're Handsome' is becoming more popular as the series' OST album is on the music market, causing a scene.

The OST album, having been released on October 14 2009, has already produced over 20,000 copies due to the amount of praise it has been getting in the public.

Not only that, the publisher of the album believes that album sales can reach over 15,000 since more orders are steadily coming in.

'You're Handsome' OST album is currently recieving good response ever since album sales were release on Hanteo charts. Not only that the song has been rising on popular charts such as Bugs and Mnet. No wonder the album is getting a good response from the audience.

Though the OST is currently gaining popularity due to their strong album sales, it seems that the series is not getting praise due to its low tv ratings. However with its solid audience and its musical background series, more audience will soon be captivated.

The album consists of 11 tracks including songs from FT Island, Lee Hong Ki, A.N.JELL and other various artistes.

'You're Handsome / You're Beautiful' is currently airing on channel SBS on Wednesdays and Thursdays till end of November.