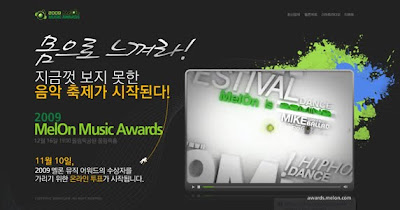 Melon.com, a popular online music website in Korea, has announced that it will be hosting a year-end music award ceremony.

The name of the ceremony is 2009 Melon Music Awards, and it will be hosted on December 16th. Melon, music distributor LOEN entertainment and cable TV company CU Media will be collaborating on this event. Melon expressed, "The 2009 Melon Music Awards will be focused on digital music sales and will be fair because sales is based purely on choice of the consumers and nobody else. We have planned this event as an alternative to traditional award ceremonies." The emphasis on fairness appears to be targeted towards Mnet's MAMA which has seen quite a number of artists shy away from it due to its questionable integrity.

Candidates of each award will be selected from songs released between the October 31 and November 1, and will be based on number of times that song has been played (30%), downloaded (50%) and other usage (20%). Combination of those factors amount to 80% and the rest are decided by user poll which starts on December 10th. There is a total of fifteen awards including Top 10, Artist of the Year, Album of the Year, OST of the Year, and The Most Popular Artist.

No information regarding participation of artists has been released so far, but since Melon is one of the biggest names in digital music industry, popular artists are expected to make appearance.