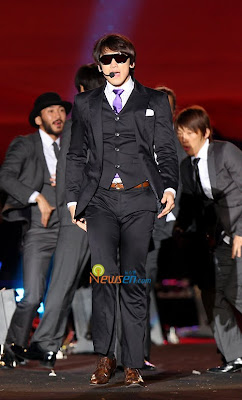 Singer and actor Rain has revealed his past experiences of injuries and accidents that hasn't been revealed publicly before.

On the 17th of May episode of MBC Kim Won Hee Yoo "ROCKMAN" he revealed that, "I got into a wrong position and landed on the wrong foot while performing on the concert stage, I fell down and injured my foot" he said.

He continued, "But the concert ended safely, after the concert I immediately went to the hospital and was diagnosed with a concussion and got a fracture where i was being treated for 1 week" shocking the everyone with his revelation.

He also revealed one more situation, "When I was on a plane, they kept saying to put our seat belts on but I did not put it on, when the plane took off I thought I thought I was going to die" and then promised to himself to put on his seat belt.

Also, in the episode he revealed more about his life and also his friendship with Lee Hyori.


World Star Rain is seriously something, from having short term memory loss to being a clutz ^^ ah, Rain, perhaps you need a Wife to take care of you/
Tags: News, Rain
Share
Previous articleNext article