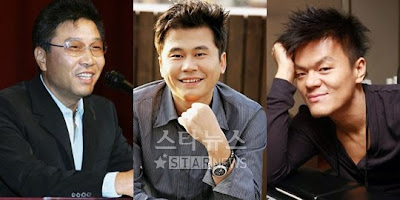 From singer to producer, Park Jin Young speaks up honestly about competition against SM Entertainment Lee SooMan president and YG Entertainment Yang HyunSeok representative that he “really wants to win”.

This was on MBC Golden Fishery aired on 11th November when Park Jin Young talked having his singers advance into the American market and also about his rivals Lee SooMan and Yang HyunSeok.

MC Kang Ho Dong asked, “Do you think So Nyeo Shi Dae will be wary when WonderGirls advanced into the American market?” and the WonderGirls members said, “We cannot bear with the thought of being wary about who wins over who. Of course we think about scoring the 100 marks, but we don’t think about who scores better than who.”

And then Kang Ho Dong asked, “What does Park Jin Young think about So Nyeo Shi Dae?”.

Park Jin Young said, “They are really fresh and pretty. But because I really like the WonderGirls, I don’t see other girlgroups in my eyes.”

He continued, “Lee Soo Man seonbae is always my stimulus. He said that if I am curious about anything, I could call him and he will talk in details about advancing into the Japanese and Chinese market. But with that I really want to win.”

Also he brought up his close relationship with YG Entertainment Yang HyunSeok representative, “Both of them are fair people. When I ask them about things, they are not people who will purposely hide anything.”

And about WonderGirls’ advance into the American market, “Even though they came in later, it seems that luck is with us. The 2 should ask me about the knowhow to advancing into the market” JYP said putting his words across carefully.

Park Jin Young said on the show, “Lee SooMan and Yang HySeok are always my motivation. When I return to Korea, we have to meet once or twice. If I ask anything I’m curious about, they are folks who will give me good answers.”

Kang Ho Dong, “So now Lee SooMan should ask Park Jin Young for advice on American advance.” Park Jin Young then replied flustered, “What kind of talk show is this.”

Kang Ho Dong then continued to ask questions, “To what extent should one ask Park Jin Young on the knowhow to American advance” and Park Jin Young replied 50.1%.

Park Jin Young then added that he saw the 51% chance for WonderGirls and hence decided to do the American advance.