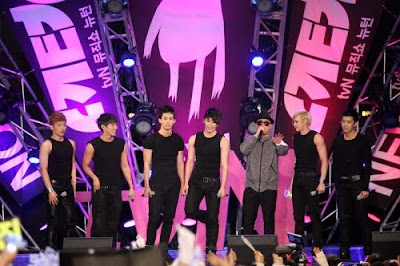 2PM was the first star to appear on tvN's music show 'Newton Street Concert, X-Concert' and had promoted the guerrilla concert on Junsu and Khun's twitter until the 15th.

Over 3,000 fans came together from various parts of the country, once again confirming 2PM's explosive popularity.

Fans began appearing one by one 5 hours before the concert at 4 PM and completely filled the entire front section of the concert. There weren't even enough seats that some fans could not enter, instead having to fill out into the sides and into the streets, completely paralyzing the streets of Hongdae.

2PM came up on stage and stated, "We didn't think so many would come," and expressed their thankful feelings. They sang 'Without U' and moved on to 'Don't Stop Can't Stop.'

'Don't Stop Can't Stop' in particular had a special performance prepared by the fans hours before utilizing their white handkerchiefs.

'Newton's' MC Gil made a surprise visit midway through the concert and hugged 2PM.

2PM's concert will be released on the 7th next month.

May be taken out with full credits. You are not allowed add yourself to the credits nor edit the credits.
CREDITS : JOY NEWS 24 (SOURCE); hazyfiasco@2ONEDAY.COM (TRANS)
Tags: 2pm, News
Share
Previous articleNext article