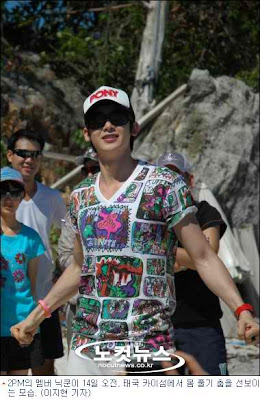 Chosen as the promotional ambassador last 2009 for Thailand due to his high popularity all over Asia, group 2PM's member Nichkhun is on a 5 day vacation with fans at Phuket.

On the afternoon of the 15th, Nichkhun and his fanclub held a press conference.

He went on to state, "I was really shy as a kid so my parents are still fascinated when watching me work." After hearing of his brother reaching #1 on search charts, he replied, "I hope that he will become more famous than me."

Nichkhun continued by saying that although the official promotional activities for 2PM are over, he will be reaching the fans once more through MC'ing and variety activities.
닉쿤 "제일 부러운 사람은 재범이형!"
Nichkhun "The person I am most jealous of is Jaebum hyung!"

During the press conference, Nichkhun was asked the question, "Is it true that you don't allow your younger sister to wear short skirts?" Nichkhun replied, "Yes, it's true. I will never allow her to wear short skirts because she is so pretty."
May be taken out with full credits. You are not allowed add yourself to the credits nor edit the credits.
CREDITS : NEWSEN, DAILIAN, DAILIAN (SOURCE) ; hazyfiasco@2ONEDAY.COM (TRANS)
It's now Junho time ^^
Follow me on twitter
Tags: 2pm, News, Nich khun
Share
Previous articleNext article