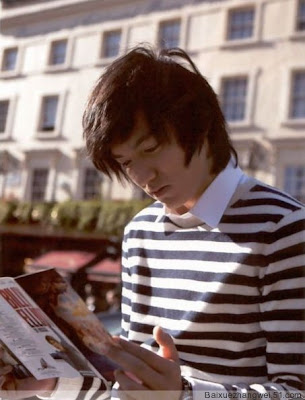 THE Taiwanese call their drama Meteor Garden, while the Koreans have named their production Boys Over Flowers.

But as long as it's an adaptation of Japanese manga Hana Yori Dango and the plot is good, the careers of its hot leading actors continue to blossom.

This is especially true for Lee Min Ho, who plays Goo Joon Pyo, the big, bad leader of F4 - a band of privileged youths in an elite school.

Other members of this foursome are Kim Hyun Joong, Kim Bum and Kim Joon, who acted as Yoon Ji Hoo, So Yi Jung and Song Woo Bin respectively.

Min Ho has clinched multiple product-endorsement contracts, and also appears in many magazines.

His photo spreads are also found in magazines such as Singles and Vogue Girl.

For the Minoz Japan First Event - Min Ho's fan meeting session, which will be held next month in Tokyo - 2,500 tickets were sold out within the first hour after they went on sale last month.

This Saturday, he will make a guest appearance at the flagship store of Etude House at Plaza Singapura here. He will also hold a closed-door meeting with his fans at Movida at St James Power Station the same day.

Since Boys Over Flowers aired in Korea in January, there has been speculation in the Korean media that he is dating pop group Davichi's Kang Min Kyung.

A self-taken photo of Min Ho and Min Kyung in a karaoke room has spread like wild fire on the Internet.

Min Ho told the media: 'After that photo was widely circulated, I predicted there would be rumours.

'I think there will also be rumours about me and three other female artistes - Park Bo Young, Mun Chae Won and Choi Eun Seo.'

Min Kyung has reportedly been on very friendly terms with Min Ho ever since she entered showbiz.

Bo Young, who acted in movie Scandal Makers, and Chae Won, who acted in drama Painter Of Wind, had worked with Min Ho in TV drama Secret Campus and the movie Our School E.T. respectively.

'I have dated two girls since I turned 19, but I'm not seeing anyone now.'

He also emphasised that he is 'definitely not a two-timer, and I won't get into a relationship easily'.

Yet he is clear about what sort of girls he likes - those who are 'innocent and elegant'.

'I have worked with Min Ho in three productions before, so it's natural that we become close friends. Despite the rumours, we are purely friends,' she said.