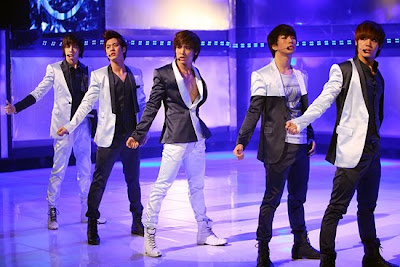 From his heart , they are "just like little brothers"

The 27th of May on SBS "One Night/Live TV Entertainment", Rain talked sincerely "Mblaq are my little brothers" after the producer was questioned "What are Mblaq for Rain?". But this answer also revealed his mind about his ex-producer Park JinYung (JYP).

Rain said that "JinYung hyung and I are the same, he talked to me: "You'll impress me once you'll jump higher than me". He indirectly said that this is what he was praying deeply for Mblaq career.

Then, with a hearty laugh, Rain said: "I think I'm already beyond JYP" and "I told him on the phone that I can do vaulting horse".