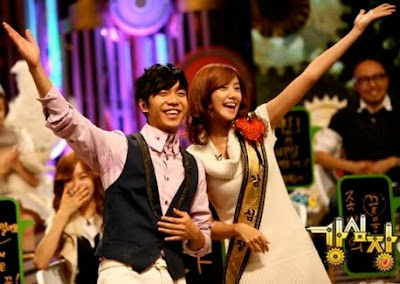 So Nyeo Shi Dae YoonA and 2PM TaecYeon was present in the recent filming of ‘Strong Heart’. The 2 had showed not just their dances as Korea’s representative idols, but also their good speaking.

Especially during the filming, Lee SeungGi-YoonA-TaecYeon “love triangle” was the hot issue amongst the guest appaearances. Previously, YoonA and TaecYeon put up a couple performance for MBC Gayo Festival on 31st December, which had sparked off talks of scandal. Back then, the 2 had clarified with the comment “It is just for business” to calm the scandal rumours.

So the issue of scandal between the 2 was put in the spotlight during filming that day even though the 2 had made it clear that it was just for pure entertainment purpose. With that, Lee SeungGi was seen uncomfortable during all the talk about the scandal between the 2.

It is said that the YoonA was also made to choose her ideal type between Lee SeungGi and TaecYeon during the filming.