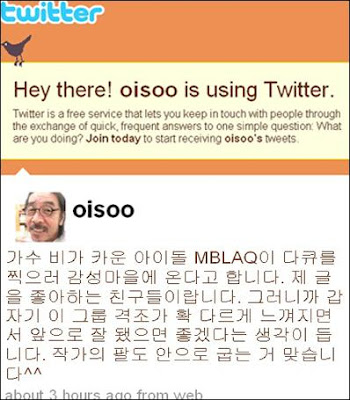 Novelist, Lee Oisoo has expressed his affection for the 5 male member group MBLAQ.

In the morning of the 20th, Lee Oisoo wrote on his twitter 'Idol group MBLAQ, raised by singer Rain are coming to Gangsum village to film their documentary.' and revealed his favor for them.

With this, the author also wrote 'I have heard they (MBLAQ) like my novels. Because of this, my impression of them changed really quickly and I think they will do well.' He also made a witty remark saying 'It is true that writer's arms bend in.'

Following the company, cable channel Mnet will have a new variety documentary program with MBLAQ, finding Gamsung in Hwacheon, Gangwon.

Gamsung village is located in Hwacheon of the Gangwon district and is well known for having Lee Oisoo as a resident. Lee Oisoo, who set a high performance of literature was invited to the Hwacheon district after a literature and a memorial hall was built.

MBLAQ who has raised topics as 'Rain's successors' have released their single 'Just BLAQ' on the 14th and are promoting their title song ‘Oh Yeah'.