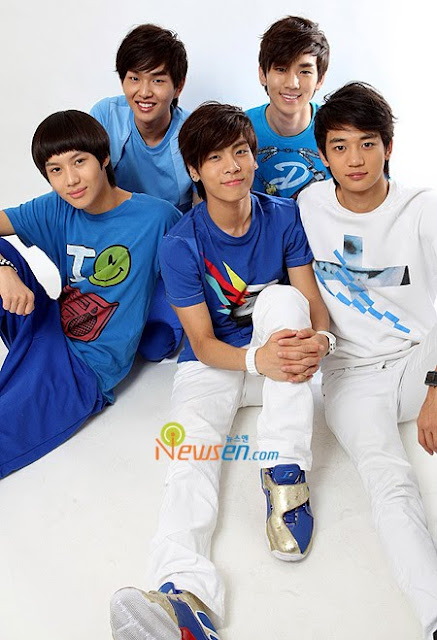 News from Sina:
Korea's new generation boyband SHINee will be appearing on the broadcast of "The Moment Prepares" this Friday night. The five handsome boys totally let go of their mysterious appearances and revealed secrets of their private lives, making fans go wild.


SHINee got the worst of the hosts dalliance, Leader Onew retaliates

To become one of the people so as to connect well with the audiences, the five members of SHINee greeted the audience in Mandarin, giving the fans a pleasant surprise. But other than the short introduction, SHINee and the three hosts were not able to communicate well with each other, like a chicken and a duck trying to have a conversation (T/N: A Chinese idiom which figuratively means people not understanding each other). Peng Yu Jian (T/N: The host's name in hanyu pinyin) saw that the five sunshine boys were a bit lost with the Chinese language, and decided to make use of his general knowledge, expressing that both China and Korea both place huge emphasis on manners, and informed that in China when you meet elders, you say "Congratulations on your happiness, prosper well. Bring on the red packets" (T/N: A phrase that the Chinese use during Chinese New Year, where married relatives are required to give their younger single relatives red packets filled with money) as a form of respect! When SHINee heard that, they diligently picked up the line, looking innocent and cute to the max as they did so. The ever funny Li Hao (T/N: Another host's name in hanyu pinyin) did not forget to add in her two cents worth and taught them the most trendy line you can say in China, "Once you are born you need to be sharp, do not be obsessed with Brother, he is only a legend" (T/N: A line used only in China, I don't really have an idea of what it means, so I just translated it word for word). Along with the rest of his members, Onew the leader learned the line diligently word for word, causing everybody to laugh out loud.

Seeing that the hosts kept on "playing" with the five innocent boys, the translator could not take it anymore and decided to tell them the real meaning of the famous line. Upon hearing the real meaning, Onew "angrily" expressed to have a PK (T/N: PK is actually an acronym from the Hokkien (a Chinese dialect) word, "Pai Kia", which means gangster, but when written as PK, means to have fight.). Onew's best strength is in creating different sounds with his voice, and this time he performed "Donald Duck loves to beat box". Peng Yu (T/N: Host's name in hanyu pinyin) did not falter under the pressure, and performed beat box as well. As a result he was teased as "The Donald Duck with Bird Flu". Li Hao (T/N: Host's name in hanyu pinyin), who is known as "Little Acting Prince" did not lose to Onew's ventriloquism, but got "owned".

SHINee's five members revealed their private life, a girl was "electrified" by Minho on stage

Idol group SHINee consists on Onew, Jonghyun, Taemin, Minho and Key. Each of them were born with exceedingly handsome looks, causing people to go wild. The honest looking Jonghyun is actually the one who knows best when it comes to wooing girls, and his best method in wooing a girl is to be obedient towards her, and be willing to do anything for the partner. The members revealed that Jonghyun likes pretty girls with fair complexion, long hair, and a natural gift for music. Key however, was pointed out as the most vain person out of the five, never failing to look in the mirror. He doesn't give up on any detail, and must at minimum change his clothes two to three times a day .

The most surprising news of all was that the gentle Minho is actually a "Charmer". In Korea, he is called "Flaming Charisma", nobody is able to escape the power of his electrifying eyes. To confirm the power of Minho's electrifying eyes, the hosts asked for a female fan from the audience to get up on stage to go through the test. Minho looked deep into the girl's eyes as he sang a love song, winking his eyes at her at the same time. Because of this electric shock, the girl nearly fainted(T/N: The Chinese tabloids like to exaggerate things a lot.).

Being called the successor of Super Junior, SHINee was under the eyes of many the moment they debuted. The five boys did not disappoint with their amazing talent in singing and dancing , showing the potential to excel and go beyond their predecessors. In this episode of "The Moment Prepares", SHINee showcased their dancing skills with upbeat and difficult dance moves, to thank the enthusiastic fans from all over the world that came over to watch them. But do not think that SHINee's dancing talent just ends at sexy male dances, they will also be bringing label mate "Girls' Generation" classic song "Gee". If you would like to see SHINee change into cute, sexy girls, do not miss this show.

Reminder: Anticipate this Friday's episode of "The Moment Prepares" at 2120. Get into the K-Pop Fever with SHINee.