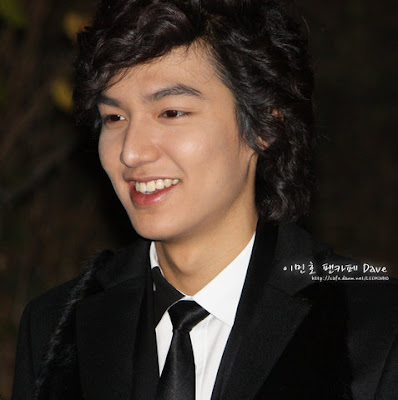 HE KEPT 800 girls waiting for hours at Plaza Singapura on Saturday afternoon due to his no-show, when his scheduled appearance was cancelled due to safety concerns.

But when Korea's hunk-of-the-moment met his fans later that evening at a closed-door event, all was forgiven.

In fact, Lee Min Ho more than redeemed himself.

The 22-year-old actor was by turns cheeky and charming, and every other comment elicited screams from the 180-strong mostly female crowd at Movida at St James Power Station. The party is organised by Korean cosmetics brand Etude House, for which he is the brand ambassador.

Take his view of Singapore girls: 'The girls in Singapore are cute and sweet.'

Although he spoke only Korean and needed a translator, Min Ho knew all the right buttons to press.

When asked how he sees himself in five years time, he said he hoped to have a toner, buffer body.

One girl said that his lanky, 1.85m-tall frame would then be 'more perfect than perfect'.

Asked which superpower he would like to have, Min Ho chose the ability to understand other people's thoughts and feelings.

He said he loved Singapore because 'it is very clean' and he wanted to explore it further.

A simple answer about his favourite Singapore dish also drew the crowd's approval.

'I haven't tried any but I do want to eat chilli crab tonight,' he said to appreciative laughter.

But don't mistake him for just another silver-tongued celebrity.

Min Ho's showbiz career had been sputtering along for two years before he found fame as F4 leader Goo Jun Pyo in the Korean adaptation of the manga-inspired series Boys Over Flowers early this year.

While the chance to travel widely is a perk of his new-found fame, he admitted that with it came the lack of freedom to roam as he pleased.

Min Ho was forthcoming about his insecurities, which made the popular actor, as one teenage girl put it excitedly to her friend, 'just like you and me'.

Fear of developing a bulging tummy has spurred him to exercise more lately.

He also claimed that his skin used to be less-than-flawless because of 'all the foundation and make-up' that he put on for the cameras.

Now, he takes good care of his skin.

'Oh, and you have to use Etude House products,' came his embarrased interjection a minute later.

Guileless? Well, he enchanted the crowd.

A young woman was heard whispering 'so cute' to her companion when he surprised the crowd by showing that he understood some Mandarin.

As Min Ho was picking a ticket from a bowl for a fan to meet him onstage, a shout rang out in Mandarin: 'Look to the front when you're doing that!'

He heeded the command immediately and looked up with an impish grin, before laughing with his delighted fans.

But on an evening when he scored all the points, one remark baffled his adoring audience.

Asked how Singaporean girls were different from Korean girls, he said: 'One obvious difference is the language. Apart from that, girls in Korea have a lighter skin tone. Singaporean women tend to have an olive, tanned complexion.'

Perhaps something was lost in translation. A fair-skinned fan mumbled: 'It's not like we're from Brazil'.

Oops. Maybe the hunky star should have taken this chance to plug Etude House's products again.

Uneasy with the media

IF HE wasn't touching his hair, he was biting his lower lip each time a reporter posed him a question.

At the Etude House press conference at Raffles Hotel on Saturday afternoon, he wasn't quite the charming, relaxed Lee Min Ho that swept female fans off their feet at Movida later that day.

Instead, he came across as a shy, reluctant celebrity.

Asked to list his bad traits, he paused a while before answering.

'It's very hard for me to pick one. Not being able to answer this question is probably my bad point?'

Min Ho admitted that he doesn't go out often nowadays because he's under constant public scrutiny.

But he's thankful that his friends don't treat him differently now that he's famous.

The Boys Over Flowers star appeared stumped when asked to pick a flower that best represented him.

'Red roses,' he finally replied, 'because they symbolise my youth and passion.'

He revealed that the most romantic thing he has done for a woman was to light up a church aisle with 200 candles.

Did he manage to win her over?

'Actually she was my girlfriend then and we were celebrating our 100-day anniversary,' he replied with an awkward laugh.