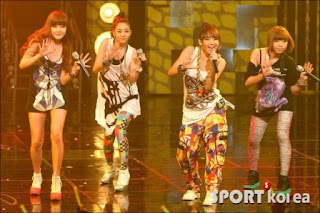 Tonight’s episode of Kim Jung Eun’s Chocolate looked back on four of the most spectacular girl group performances done on the show. The special stages were ranked and guess which girl group got the top spot?

With girl power overload, members of Kara, 4minute, and Brown Eyed Girls’ joint performance got fourth place. The banging girls of After School placed third. Second place was granted to So Nyuh Shi Dae who showed a cool dance number with their groups’ dancing queen, Hyoyeon.

But repping their home, sweet home at number one was 2NE1.

The foursome caused major hyperventilation among the audience with their suave performance back in August 2009, of Hip Hop Freaks led by CL and Beyonce’s Crazy In Love accompanied by the strong vocals of Miss Spring, Park Bom. The girls then lit up the stage with a fiery performance of their debut song, Fire, and got showered on, on stage, literally, when water started pouring down in the middle of the song. The rain showers were probably used to put out the fire the girls started but it did the exact opposite, (if you know what I mean).

If you haven’t watched 2NE1′s guesting on Chocolate eons ago, then this is the time for you to see exactly why they placed first. Congratulations to our girls.

Oh and if you didn’t know – 2NE1 was also the only girl group chosen to be included in KJE Chocolate’s Encore Special, seems like this show just loves our girls. Check out In Da Club:

So what does everyone else think? Do the rankings seem fair to you?
————–
DO NOT REMOVE THESE TWO LINES WHEN TAKING OUT
Video upload by Kazzy @ ygladies.com
Article by Viscount @ ygladies.com