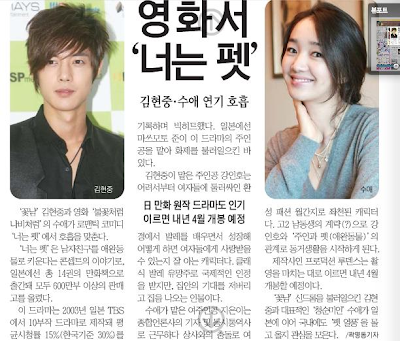 ‘Flower Boy’ Kim HyunJoong and SuAe from movie ‘The Sword With No Name’, will act in romantic comedy ‘You Are Pet’.

‘You Are Pet’ is a story from the 14-series comic in Japan which sold over 6million copies after its publication. It is about raising a boyfriend like a house pet.

It has been made into a 10-episode drama by Japan TBS station in 2003 with average viewership of 15% (equivalent to 30% in Korea), making a big hit at that time. In Japan, Matsumoto Jun aroused attention from the public for his role in this drama.

Kim HyunJoong’s role is the main character Kang InHo grows up in a female dominant environment, while learning ballet, he knows well what he can do to be able to be loved by females. Even though he is a promising classic ballet dancer getting recognition internationally, he ran away from home to the disappointment of his family.

SuAe’s character is Ji EunEe who is a reporter at a general media firm and takes on a job of a simultaneous translator after work. She had conflicts with her boss and was demoted to take care of monthly female fashion magazine instead. She started her cohabitant life with Kang InHo with ‘Owner and Pet’ relationship.

Production company Ludens said that this movie would likely to premier in April next year.

Riding on ‘Flower boy’ syndrome Kim HyunJoong and ‘pure and innocent beauty’ representative SuAe, they have gathered attention both locally and in Japan to see if they can drive this ‘Pet syndrome’.