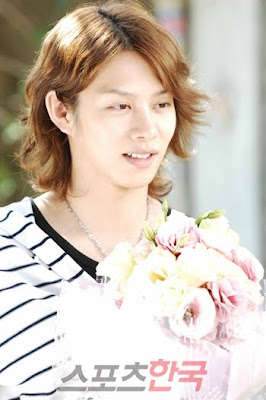 Super Junior's Kim Heechul lost 8kg, and immersed himself in his acting.

In a recent interview with SportsHankook, Kim Heechul stated, "To be able to appear on screen as the best person I can be, I started on a weight loss plan. In two weeks I successfully lost 8kg. To be able to give everyone my best self, I feel very content."

In SBS's weekend drama [I Love You Ten Million Times] (Screenplay: Kim SakyungㆍDirector: Kim Jungmin), Kim Heechul has successfully changed into an actor. In the drama, alongside the group Sugar's Park Soojin, they act as a couple, & he achieves this role very well. Kim Heechul wasn't satisfied with himself in recent scenes, and began to exercise and eat less, starting a special grade weight loss plan. Kim Heechul stated that his weight loss secret was that he used tofu & roasted chestnuts to replace rice.

Kim Heechul said, "Not only as a singer, but I want recognition as an actor. Whatever appearance I give on stage the fans always gaze lovingly, but it's different in a drama. Not merely just weight loss only, but it takes self-management as well to show the best image."