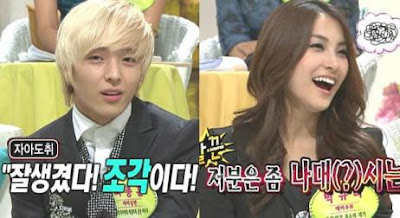 FT Island Choi JongHoon has recently further blown up criticisms against him on his minihompy.
He referred to the incident between him and KARA Park GyuRi on MBC ‘SaeBaGwi’ aired on 17th October. On the show, Choi JongHoon was introduced as the “pretty boy acknowledged by all” and then the MCs said, “This is the concept similar to that of Park Gyuri. What do you think about Park GyuRi?”
With that he faced Park GyuRi and said, “That person’s personality is a little frivolous, my personality is that I’m honest and straightforward.”
Guess what happens next.
Netizens then broke into hot debate saying, “No matter what, she is 2 years his senior, such a comment is a little too inappropriate”, “Such words said on broadcast is a little too much, like he did not think through what he said at all” etc.
With netizens’ criticism, Choi JongHoon wrote an apology on his minihompy on 18th October.

In his apology, he wrote,
Hmm, first off as an entertainer, I’m really sorry
This is a mistake because I was so too timid
And that’s why all the little talks came up
That day after recording, I apologised to that person
That was the concept for filming that day, and I was too much? Because such a thinking
Haha anyway getting concerned over such small matters is really funny!
Really sorry!!!!~ I will take the scolding as concern!
- RingDingDong


With that, netizens refuted, “What kind of apology is that? He really has no sincerity”, “And he writes off as RingDingDong in his apology… I see he has not reflect on himself enough yet” etc.
Some KARA fans have actually posted up comments on JongHoon’s minihompy and the apology note was taken down.