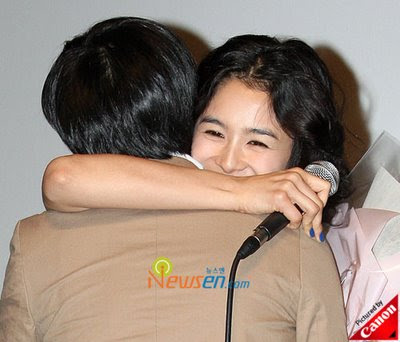 Actress Kang Hye-jung publicly expressed her affection for her to-be-husband Tablo on Tuesday, saying she is invigorated by his consistent support for her.

Kang made the remark at a press conference for her new film "Kill Me" held at the CJ CGV theatre in Apkujung, Seoul.

"I am happy to be getting married but sort of in a daze too," said the 27-year-old actress who will have a private wedding on October 26.

In early September, Kang and the popular hip-hop duo Epik High leader had announced they would get married this month and have a baby on the way. They had dated since late last year.

Kang is a critically acclaimed actress who first rose to stardom for her role in "Old Boy" by Park Chan-wook which took the Grand Prix award at the Cannes Film Festival in 2004.

Her new film "Kill Me", a romantic comedy about a hired killer who falls in love with his client, is set for release on November 5. Actor Shin Hyun-joon of "The Gingko Bed" and "Marrying the Mafia" will co-star in the movie.