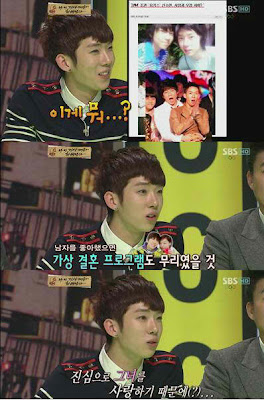 2AM JoKwon gave an explanation about the rumor saying that he was gay.

According to the internet on the 15th(KST), JoKwon said that the rumor that he was gay, caused by a photo he took with U-Kiss' Sin SooHyun, was false in the SBS Chinese New Year special program 'Yong GuraHwan's Big Match'.

JoKwon said, "If I was gay, going on the virtual marriage program, MBC's 'We Got Married' wouldn't be possible. I do the program because I really love Gain."

'Yong GuraHwan's Big Match' is a program where both the journalists who're trying to uncover stars' secrets and the actual stars have a talk battle.
May be taken out with full credits. There shouldn't be any addition or removal to the credits.
Source: AJNews Translated by: JinaStar@2ONEDAY.com
*I think that's one good reason. If he's gay, he won't do "We Got Married" program.
"I do the program because I really love Gain." (So sweet ^^)
Follow me on twitter
Tags: 2am, Jokwon, News
Share
Previous articleNext article