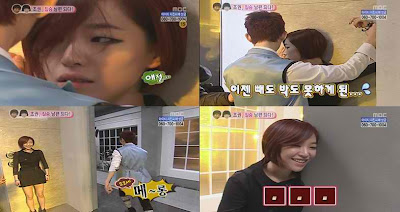 We Got Married ‘Adam couple’ Jo Kwon and GaIn’s kiss scene filming turned out to be a secret camera (prank).

During MBC We Got Married aired on 6th February, the 2AM members were featured at the filming set for their new song ‘Even If I Die, I will not let you go’ MV filming.

Jo Kwon has asked GaIn to appear in the MV for PR sake, GaIn who was shy at first agreed eventually. But this was all planned by Jo Kwon, who wished to have a kiss with his make-believe wife.

He even received the help from the 2AM members and the MV director for this. But the 2 were seemingly awkward doing the scene, and NG-ed several times. In the end, after several NGs, the atmosphere for the kiss scene seems promising until Jo Kwon took a U-Turn.

Jo Kwon had ended up kissing the forehead even though it was planned for a lip-on-lip kiss scene. With that, Jo Kwon said during the interview, “If it was just the 2 of us, I’m confident of doing well. But with everyone watching, I don’t think I can do it sincerely.”

In the end, the filming was carried out in a place where all the filming staff could not see the 2. The 2 were close to filming the real kiss scene when at the moment Jo Kwon said, “It’s a joke.” revealing that it was all a prank.

Jo Kwon revealed during the interview, “I was worried if it was for show or for love. I don’t want to do the kiss publicly. Actually even after the filming ended, I won’t be able to do it. But it was a good opportunity to build up my courage.”

GaIn also said, “It was a bit of a shame. If Jo Kwon had forced on, our boss would not be able to say anything. Guys should be bold.”

*It turned out to be a secret camera.. But I like this couple