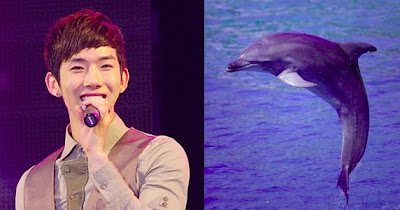 Jo Kwon revealed on a recent recording of Chit Chat with Beauties that he wants to reborn as a dolphin.

Chit Chat with Beauties is a show where foreign women talk about their experiences living in Korea.

During the show, a topic was brought up and the topic was, "If you were to be born again, what would you be?" and Jo Kwon surprised everyone by answering he wants to be Xiah Junsu a dolphin.

When the MC's and other guests asked why he would be a dolphin, Jo Kwon said, "If I were to be born again as a dolphin, I'm confident I could put on an amazing show!" Of course, we all know that diva Jo Kwon wants to put on a show. But you have to admit, he would put on the best dolphin show with his Saucy Hip Move. While on the topic of dolphins, doesn't the sound a dolphin makes remind you of Jo Kwon? Or Maybe it's just me...

Seulong, a fellow member of 2AM jokingly answered, "If I were to be born again, I'd want to be a Western blonde girl." So in other words, a cheerleader? He continued to state his reason, "I want to wear pretty dresses and try to walk in high heels." I wonder if his stint as a Dirty Eyed Girl had anything to do with that answer.

Never thought I would be pasting a picture of a dolphin next to Jo Kwon. But then again, it is Jo Kwon. This episode is scheduled to air on the 26th. Also check out the 2ONEDAY Forums.